Alex Clausen is Matthews Steer's Employee of the Year

Alex Clausen is Matthews Steer’s ‘Employee of the Year’, selected by the executive team for her exemplary performance and commitment during the 2016-17 financial year. 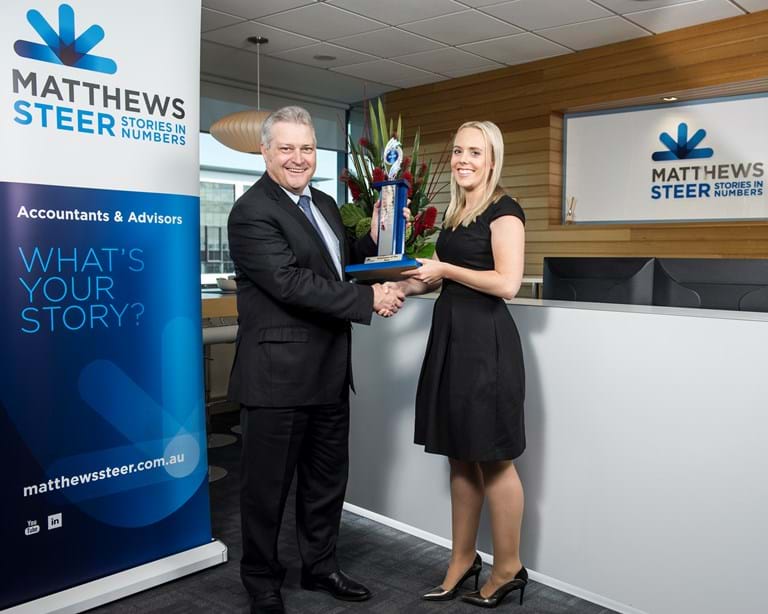 “Alex has grown tremendously as an accountant and client manager this year,” said Matthews Steer CEO Ken Matthews. “She’s a trusted advisor, both to our clients, and to her fellow teammates, and she’s a safe pair of hands who always gets the job done. She’s taken on a tremendous amount in her first year as a client manager and has set the standard over the past 12 months.”

Alex, was further recognised at Matthew Steer’s annual Recognise, Encourage, Reward, (RER) Awards with the ‘Most Significant Personal Growth’ award, and with promotion from senior accountant to supervisor.

"Alex's promotion to supervisor is well earned, not just because of the fee growth and technical growth, but also the growth in Alex as a person," said Matthews Steer's director of Business Services, Stephen Wooster. She has grown up at Matthews Steer. We have seen her grow from the age of 19, face challenges, challenge us, mature and become an incredible professional and I have personally had the privilege of sharing her journey."

This year’s RER Awards also recognised a number of other promotions including Matt Caruso, from the Private Wealth team, whose delivery-focused approach and client relationship-building skills saw him elevated from Manager to Associate, bringing Matthews Steer’s executive team to five partners and four associates. Meanwhile, David Scolla, Gautam Nakra and Teresa Jing were all promoted from accountant to senior accountant.

Matthews Steer’s ‘Rising Star’ award went to Emily Bickford from our administration team, for her outstanding performance and commitment during the year, while Nidal Mazloum (accounting) won the ‘Contribution to Culture’ award for the second-consecutive year for his team spirit, willingness to share his knowledge and coach others, and his passion for his work.

Chris Galea (accounting), who took part in the Victorian Police’s Kopkoda Project in 2017, was the winner of Matthew Steer’s Contribution to the Community Award, for his work helping young people from North West Melbourne to develop life and leadership skills on the infamous Kokoda Trail.