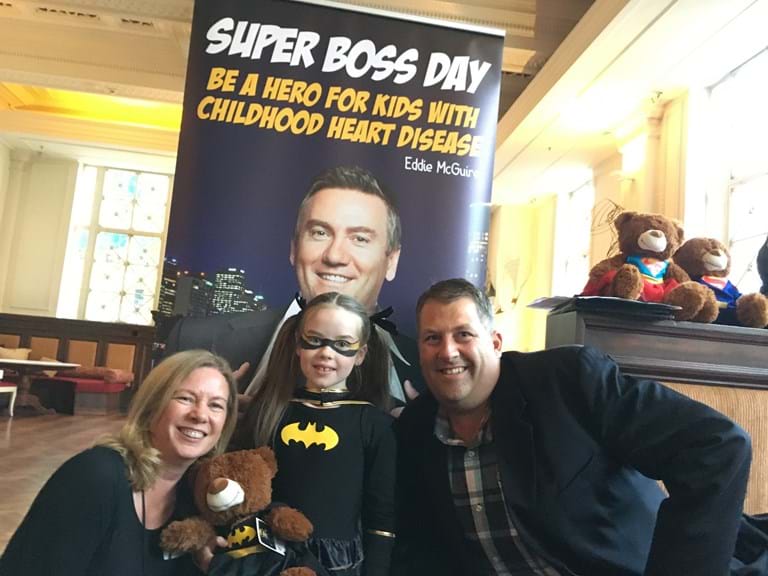 One of the charities Matthews Steer supports annually, Heart Kids is dedicated to supporting children with congenital heart disease. Childhood heart disease is the greatest killer of kids aged younger than one, and Heart Kids supports kids and their and their families with research, advocacy, support and awareness.

Guests heard from Samantha, whose daughter Scarlett who was born healthy, but became ill at four months and was diagnosed with dilated cardio myopathy meaning her heart was unable to pump blood effectively. In heart failure, her only option was a heart transplant and, in an Australian first, she became the first heart recipient to receive an organ from a donor with a different blood group to her own.

Samantha told event guests that the family’s relationship with Heart Kids began the first day Scarlett was in hospital. “We’ve been very lucky to attend two Heart Kids camps as a family and spend time with other children and enjoy all the fun activities,” said Samantha. “We’re very grateful to Heart Kids and we always encourage Scarlett to live the best life she can to honour her donor.”

Attendees at the annual lunch were on the edge of their seats as special guest speaker Ron Iddles shared ‘25 years homicide investigation in 25 minutes’.

Veteran investigator Iddles, who is renowned as ‘Australia’s greatest detective’ and recorded a 99% conviction rate during his career, took guests on the investigative journey of a homicide detective.

He attributed his success rate to his ability to listen and engage saying, “I’m not a doctor and not a psychologist but I understand human relations.”

Iddles attributed rising homicide rates with today’s fast-paced society: “Parents engage with kids less than four minutes per day but let them use devices for more than four hours a day,” and said the prevalence of depression and anxiety disorders, and high suicide rates, were directly attributable to the lost art of communication and the consequent break down of the family unit, imploring people to “slow down and reengage.

“The signs (of criminality) are always there but we are caught up in this fast paced world,” said Iddles. “Sometimes all it would take to prevent a crime is asking someone the simple question: ‘are you ok,’ but these days we don’t want to engage and we don’t want to get involved.

“As human beings we have to pick up on the signs and have those difficult conversations. Otherwise we’re going the wrong way as a society.”

Iddles shared insights into the three keys to solving a homicide, the identity of the victim, the cause of death and the motive for murder, discussed some of the high-profile cases he helped to solve, and talked about the mentors who had helped him establish his values and stick to them.

He ended his talk on a positive note saying: “most people who commit murders aren’t bad people, they just made bad choices”. And he encouraged the people in the room to unplug their devices and reengage with the world around them.

Heart Kids receives minimal government funding and, with one baby diagnosed with heart disease every three hours in Australia and four lives lost each week, the charity relies on donations from supporters to help them make a difference in the lives of children affected by childhood heart disease and their families. If you would like to join Matthews Steer in supporting Heart Kids please make a donation here. https://www.heartkids.org.au/how-you-can-help/donate-form/donate-gf/