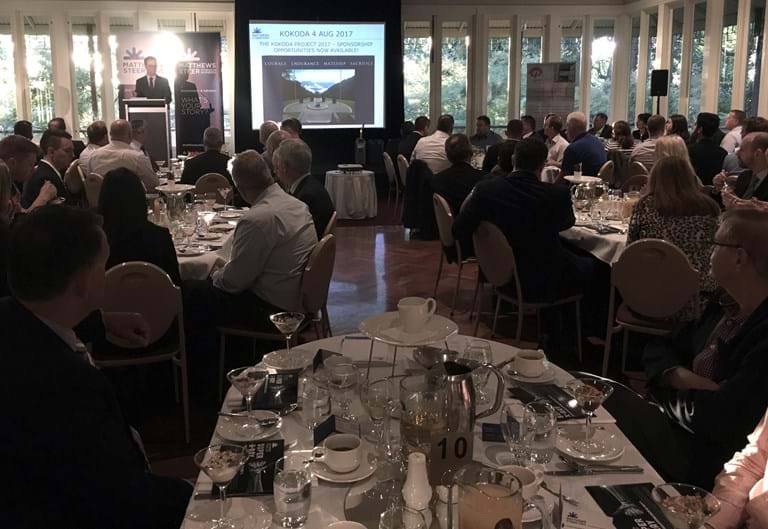 The pair outlined some of the challenges they’ve faced during their 10 years at the helm of their innovative Truganina-based manufacturing business, and highlighted the benefits they’ve experienced since they started working with Matthews Steer.

“We’ve never regretted it to this day,” Carapellotti told the 100 assembled breakfast attendees. “Matthews Steer is like our business partner.”

Ruefully acknowledging that he’d predicted a Clinton victory, breakfast MC Brett McLeod shared some insight into global politics and Trump’s election, flagging that his opinion poll results have been the worst of any president in history since his inauguration.

McLeod posed the question: “has populism as a political force reached its peak,” citing the recent Dutch election (which didn’t go per the polls), Pauline Hanson’s One Nation party falling short of the predicted proportion of the vote expected in the West Australian election, as evidence that people may be starting to question what they are voting for.

However, he still believes populism is causing an era of uncertainty, saying: “this is a great time to be in opposition, and a tough time to be in government”.

With changes to superannuation regulations looming on July 1, Matthews Steer’s Anthony Flapper spent some time explaining the reforms and their potential impact on breakfast attendees. We’ll be sharing an article with greater detail around these super reforms in the coming week and, if you haven’t already taken our 60-second super x-ray to find out how you’re affected, you can do so here.

For information on how you can attend future Matthews Steer Success Stories breakfasts please email info@matsteer.com.au